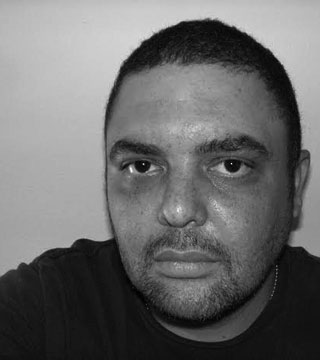 McCrae, a University of Iowa Writer’s Workshop graduate and Dean’s Graduate Research Fellow in English, believes writers find inspiration in mysterious ways. As he watched the TV program years ago, McCrae was fascinated by a character who recited Sylvia Plath’s “Lady Lazarus.”

“I was 15 and I thought that sounded really cool,” says McCrae, who at the time didn’t read poetry. “And that day I wrote my first eight poems. They were all really bad. I think I had some inclinations to do it before that moment, but the impulse was sort of obscure. I’m not really sure what it was about poetry that made me want to do it, but the Sylvia Plath thing put me over the top.”

A published and award-winning poet

McCrae has journeyed far from his early poetry. His 2011 collection “Mule” (published by Cleveland State University Poetry Center), has earned widespread critical praise. The Kenyon Review calls McCrae’s verse “meticulously controlled,” the poems containing “a music all their own, refreshingly and uniquely invested in the mechanics of meter.” McCrae couples this formal control with engaged and unflinching explorations of personal history, race, marriage, divorce, and parenting a child with autism.

More about this topic:

McCrae was also recognized as one of 10 exceptionally promising young writers by the Whiting Foundation with a $50,000 award. McCrae’s next poetry collection “Blood” is slated for publication by Noemi Press in 2013.

An unlikely path toward becoming a writer

But before all this success, McCrae did not have an easy time of it. He endured a series of disappointments after his family moved from his childhood home in Texas to California when he was 10 years old. He wound up failing several grades and dropping out of high school before earning his GED.

A few years later, while considering community college, he embarked on a systematic program of reading all on his own. He found a book about the image of Native Americans in the work of Renaissance-era Europeans, such as Shakespeare, Montaigne, and Edmund Spenser. McCrae proceeded to read the complete works of all three authors, and branched out from there, reading many canonical works.

His quest to learn eventually led him to a 4-year liberal arts program at Linfield College in Oregon.

No one in his family had gone to college before. He didn’t really know what it was like but he wanted to go. “College was sort of a mythological fancy place where smart people went,” McCrae says. “So to prepare, because I knew my particular interest was English, I read a lot, a lot, a lot.”

Before earning his bachelor’s degree, he decided to apply to about a dozen graduate programs, but only after encouragement and prodding from a faculty mentor at Linfield College, Lex Runciman, did McCrae apply to the Iowa Writer’s Workshop.

After graduating from the Workshop, McCrae’s life as a writer took a curious turn—he moved to Cambridge, Mass., and earned a degree from Harvard Law School. While he didn’t go on to a career in law, he sees similarities between the interpretative tools for close reading that lawyers and poets apply as they look at the world.

“I made a pretty big stylistic change in my poetry and switched up what I had been writing,” says McCrae. “I started publishing more regularly, and it started to feel like whatever it was I was doing people were enjoying. It was of some use to somebody else besides me, which is a nice feeling.”

Before this change, his poems were free verse, single-spaced, with more straight-forward punctuation and grammar. His poetry since 2005 embraces more formal rhythmic constraints. In “Mule,” all the poems are metrical, or use a fairly regular beat. His recent work also makes use of rhyme and repetition. “The sound is organized around principles that have been active in English poetry for 700 years or so,” says McCrae.

Paradoxically, perhaps, by embracing formal constraints, the rules of meter and rhyme, McCrae has found a more original voice.

“Without making any grand claims for the unconventionality of the poetry that I write now, the stuff I was writing before was more conventional and less me,” McCrae says. “It makes me feel freer with what I say, oddly. It almost doesn’t make sense, but I feel a little freer when I have those constraints.”

With poems that touch on complicated emotional experiences, including matters such as love, divorce, race, racism, autism, and disability, McCrae’s work lays bare personal biography, but he says doesn’t think about it much.

Noting that many poets draw material freely from their own life experiences, McCrae believes that remaining open to the richness of autobiographical material can be a potent catalyst for writers.

“You have to be careful what parts you close off,” says McCrae. “You need to have space to range around, and if you won’t touch certain subjects because they’re too personal for you, I think that’s really limiting.”

Balancing his word craft with personal topics, McCrae’s poems take the reader through formal writing devices into human experience. He hopes readers find it easy to make a connection with his work.

“I try to write poetry that I don’t think you necessarily need to read a lot of poetry to get,” says McCrae. “Even if it looks bewildering on the page or if it sounds weird when you start up with it, if you just read it out loud, you can hear that it’s actually in a lot of ways relatively straightforward.”

McCrae originally wrote the divorce-themed “Are Roses Are” as a counterpart to an earlier poem. “I felt like I needed a poem of equal weight to the marriage poem to sort of balance the book out,” says McCrae.

But by the time he got to the final draft of “Mule,” he disposed of the long marriage poem as not quite up to snuff. “Weirdly, the poem I wrote to balance the book wound up eliminating the thing that made me think I needed it in the first place,” McCrae says.

It’s relatively simple to write about his own life, he says, because the material is readily available. But to be able to write in the first place, McCrae tries to stay in a state or condition of receptivity. Sometimes this leads to less linear, more associative, collage-like results.

“When I’m writing a poem like ‘Are Roses Are,’ it requires me to be a little bit more detached from an idea of any particular story,” he says. “It’s more like I want to write about a subject or a time, rather than a particular thing that happened on a particular day. That allows me to be more open to disparate things related to that subject or that time, so it makes the poem come out of that process more collage-like. I have more freedom to range.”